Behind the Scenes with Timothy John Wilson

Tell me about your creative role in The Gondoliers, what drew you to be involved in this production?

I’m the Musical Director of the show, so I make sure that throughout the wonderful story telling, detailed costumes, incredible sets and superb dancing; there is a brilliant musical experience for everyone in the theatre. This will be my fourth show with GSOV as conductor, and third working with Adrian. We had been having talks about bringing Gondoliers to life before we even started working together, and through some tipsy-turvydom (just as Gilbert would have liked it), we found ourselves fortunate enough to have this wonderful opportunity. I personally have been coming to GSOV shows apparently since while still in Mum’s womb, according to Dad, and have hardly missed a show in 24 years. In 2011, I achieved a career goal when I began playing in the GSOV orchestra, and in 2014, it was a dream come true when I began to conduct for them. Every experience I have with this company I’ve known all my life is an immeasurable pleasure, and a great honour.

What sort of person is going to love this show?
Just as our cast age ranges from 9 years old to above the 70s (we’re not allowed to say just how old), we believe there’s something for everyone in this show. Gilbert & Sullivan has stood the test of time, and their stories, values and lessons are as relevant today as they were when they were written.

What's challenging about bringing this script/ music to life?
As Music Director, my biggest challenge has been keeping the music true to the composer’s original vision. Over the last 127 years, there have been many small changes to how the music is traditionally played, and I’ve spent a fair bit of time researching old hand written copies of the score and libretto, as well as original Savoy Theatre recordings. It has been an incredibly eye-opening experience to the depth of the history of this one single opera, let alone their entire repertoire. 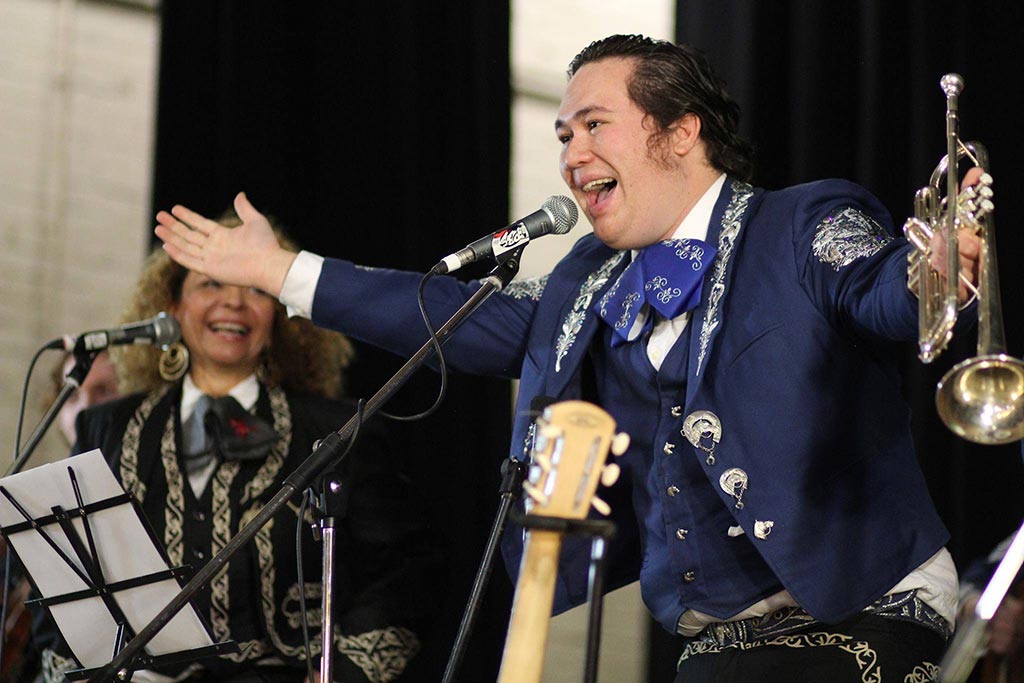 What will the audience be thinking about in the car as they drive home after this show?
They’ll be toe tapping to the catchy tunes they’ll hear, and will be pleasantly surprised at how current the show feels, especially in Australia’s rocky political climate!

How is this production bringing something new to Gilbert & Sullivan?
To showcase the tremendous talent of our wonderful dancers, we’ve opened up the Dance a Cachuca with a musical arrangement of Sullivan’s music, paired with the naturally talented Sarah Cossey’s choreography to present the showstopper that this song really is!

What's going to surprise people about this show?
Whenever I go and see a show, no matter how high my expectations are, a really good tenor aria can take me by surprise any day. Fortunately, we have a wonderful tenor to do just that with the famous Pair of Sparkling Eyes.

Who's the funniest person in the cast?
Luke Belle (Giuseppe) will stop whatever he’s doing to join in on my merry marking and frivolity, often while still in character! His improvisation in rehearsal is only matched by his improvisation on stage!

Who in the show is most like the character they play?
Erin Towns, while not a lowly Venetian peasant, is still the most loving, loyal and humble person a lady could hope to be. I’m sure she takes endless delight in singing When a Merry Maiden Marries not only from her character, but from herself.

Who is least like their character?
Renn Wortley plays the scheming tight-pocketed opportunist Duke of Plaza-Toro, who puts pride and fortune before all, except maybe his beautiful daughter Casilda, oh and his erm… wife. Outside of his role, Renn is just the most polite, generous, hardworking man; very willing to dedicate himself for the cause of the show.

"In 2011, I achieved a career goal when I began playing in the GSOV orchestra, and in 2014, it was a dream come true when I began to conduct for them"

Without giving anything away, what's your favourite line from the show?
In response to hearing how much the women adore the gondoliers, the men of the chorus take a stand, and belt out an anthem of solidarity lead by Sam Hargreaves, often accompanied by a powerful roar of approval. A roar that would make any MCG cheer squad proud.

What did you want to be when you grew up?
People used to laugh at me when I told them I wanted to be a comedian when I grew up… well, no one’s laughing now!

What's your favourite stage show?
Honestly, whichever one I’m currently in. I have the immeasurable pleasure to be heavily involved in Melbourne’s musical theatre/ opera scene, and as a trumpeter, pianist and conductor will perform in around 20 different musicals a year. During each show’s performance season, I listen to the soundtrack in the car everywhere I go, and it always feels like the best show in the world. Last week it was Disney’s The Little Mermaid; the week before it was Verdi’s La Traviata. No prizes for guessing which soundtrack I’ll be listening to in the next few weeks!

Who do you look up to (as a director/ musical director/ choreographer etc.)?
For me, my favourite MDs are those who’ve risen up the ranks by playing in the orchestras of shows, those who are MDs because they’re massive fans of the music. I’ve had the privilege to work with many of Melbourne’s best MDs. Lyric Opera’s Pat Miller taught me to find the beauty in every quaver, Nova’s Tony Toppi taught me how to handle the pressure when things are literally catching on fire on stage, and the late John Hopkins taught me about the incredible responsibility that falls on the shoulders of a conductor.

In the professional scene, Melbourne Symphony Orchestra’s Ben Northey is still my favourite, as he is an insanely talented conductor and musician, but an even greater bloke. Even in-between conducting the MSO and Christchurch Symphony, he always has time for his students, including myself, whether it be about the subtleties of Bizet’s writing for the opera Carmen, or about the recent AFL game on the weekend. The fact that he stands on the international stage as a conductor while holding the Australian values of mateship, a fair go for all, AND being an obsessed AFL fan make him one of the greatest for me.

When you have a five-minute break during rehearsal, what do you spend that time doing?
I like to entertain the cast with some jukebox playing behind the piano. If I overhear someone say “it was so thrilling”, I’ll instantly break out into Thriller. If someone unknowingly sings the first few notes to Poor Wondering One, I’ll continue playing the melody for them to encourage them to continue. Most of my musical jokes are greeted with groans, but occasionally I’ll get a pity laugh out of someone!

What do you do when you're not doing theatre?
When I’m not at the theatre, I’m off supporting the mighty Essendon Bombers. I’ll travel interstate to see them, but will often go to the MCG to watch any other cracking games of AFL. I also spend a lot of time in worship teams in Melbourne’s Baptist music ministry, currently serving at Canterbury Baptist, City on a Hill, Sunshine Baptist and the Belgrave Heights Convention.

What’s the last thing you do before you step out on stage / the curtain goes up?
I knock on the door of every change room and say “MD says chookas”, find a quiet place for a short prayer, then two minutes before the lights dim, I’ll get into my white silk tails. It’s always the last thing I do before taking up my baton.