Come into the Garden Maud 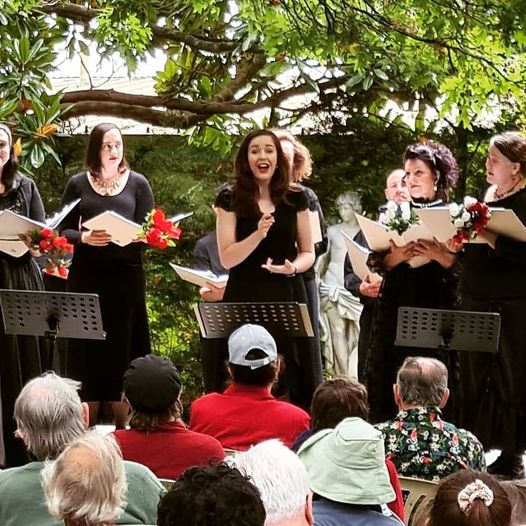 Erin Absalom and cast performing in the garden at The Knowe during
2021’s The Flowers that Bloom in the Spring
Photograph taken by Harold Absalom.

The Golden Years of British Song!

In this concert series we will celebrate the era of the Drawing Room Ballad, once a central component of British, and indeed, Australian, musical life, and one which was directly parallel with the age of Gilbert and Sullivan. We will return to a time when the ability to sing after dinner – or at any time – was a form of social entrée. Said Sir George Sitwell: “nothing makes you so popular”.

“Come into the Garden Maud” will re-tell the story of this body of once-famous music, one which endured in the memory of the English-speaking world. From Mendelssohn to Vaughan Williams to Frederic Clay, from Prince Albert to Eric Coates to Arthur Sullivan himself, the writers of drawing room ballads immortalised all the major social preoccupations of their time with music that was remembered for generations. These are songs of love, hearth and home, soldiers and sailors, the sea, exotic places, disaster, death, and childhood, many of which are of excellent quality and require skilled execution. They charmingly bring to life the ambience of Victorian and Edwardian society in a unique manner and are still very enjoyable today. In the wonderful garden setting of “The Knowe”, “Come into the Garden, Maud” promises to be a delightful evocation of a lost era.

Come and enjoy a glass of bubbles or a cup of tea in the English garden, or inside the historic hills cottage, The Knowe (circa 1919). Even bring your own picnic and luncheon on the lawn or under the 100 year old oak tree. Garden opens at 12:30pm.